Auntie Ming and the Lotus Child, 2016

Lauren Iida’s Auntie Ming and the Lotus Child was inspired by her friend and adopted "auntie" from when she was living in a small rural village in Svay Rieng province, in remote eastern Cambodia. Iida notes, “Auntie is shown here on her bicycle holding her first grandchild. As a survivor of Pol Pot's Khmer Rouge genocide in the 1970s, which cost her most of her family, she was especially proud of the new generation she was raising and would parade her grandson around on this bicycle throughout the village every chance she got.” It is made of hand-cut paper and watercolor painting.

This artwork is part of a curated collection by Renee Adams for the Maple Park Capitol Campus Child Care Center in Olympia. The art selection committee wanted the art to be mainly for the children. They wanted to focus on Northwest artists from diverse backgrounds and geographies, and artworks with color and nature-inspired imagery. The Child Care Center has six classrooms, as well as outdoor classrooms and play spaces, for eighty-four children.

This artwork was acquired for the State Art Collection in partnership with Department of Enterprise Services.

Lauren Iida specializes in intricately hand-cut paper artworks. She often also includes watercolor paints, ink washes, and shadow play. Much of Iida's work is influenced by Cambodia where she has been working on nonprofit and social entrepreneurship projects since 2008. Other influences include her family's Japanese American heritage, their incarceration during WWII, and her Pacific Northwest home.
Iida was born in Seattle and earned a Bachelor of Fine Arts degree from Cornish College of the Arts in Seattle in 2014. She shares her time between Seattle and Siem Reap, Cambodia where, in addition to her own artistic practice, she leads art tours and operates the artist collective Open Studio Cambodia. 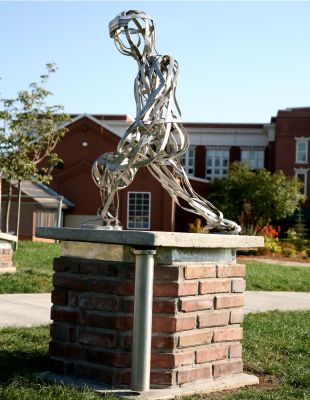