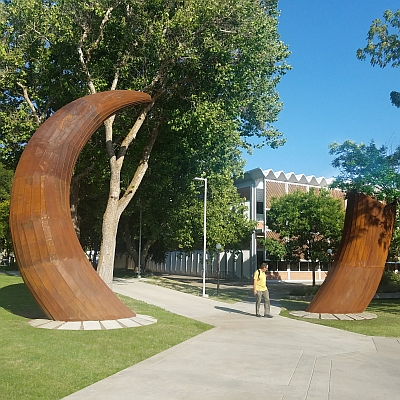 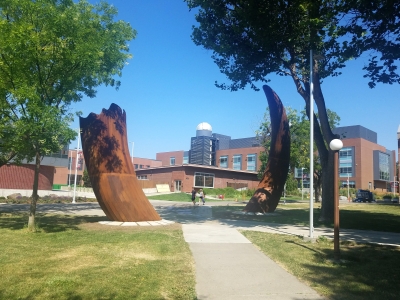 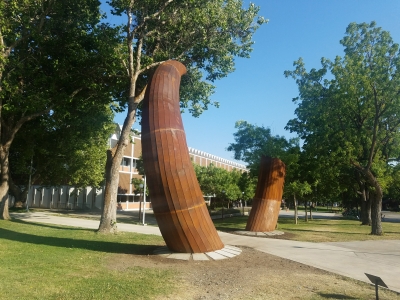 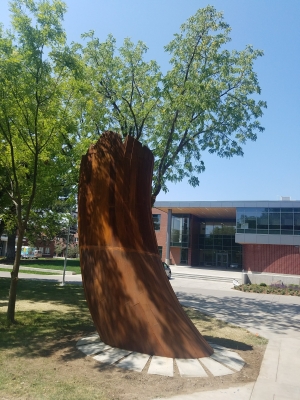 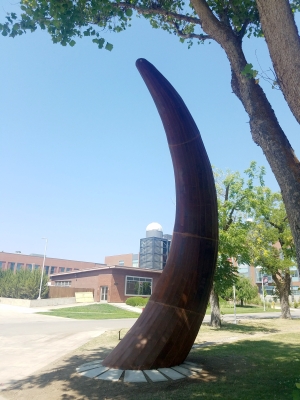 Mammoth is a large-scale steel sculpture created by artist Ilan Averbuch. It is located outside of the Samuelson Building at Central Washington University, which houses the departments of Computer Science, Mathematics, and Information Technology and Administrative Management. The installation stands as a striking and iconic landmark.

Shaped like a monumental mammoth tusk, Averbuch's sculpture appears to pierce the ground and emerge from the other side. It was inspired by a femoral bone fragment of the Wenas Creek Mammoth that is housed in the University's collection. Averbuch states, "The bone stands alone without its body, asking us to use our imagination to reconstruct its skeleton. It brings to mind the natural, anthropological, archaeological, and geological history of the area of Central Washington. The composition suggests the continuation of the mammoth tusk as still being buried underground, encouraging the mind of the viewer to fill in the blank and continue the curve. The visible elements are large and wide, but it is the invisible part beneath the ground that engages the mind to complete the work. Thus, each viewer participates in creating the work."

Click to watch the installation of Mammoth with some comments by Ilan Averbuch.

This artwork was acquired for the State Art Collection in partnership with Central Washington University.

Ilan Averbuch is a sculptor who grew up in Israel, and attended university in England and the United States. His artworks are mainly large-scale outdoor sculptures, made from raw materials such as stone and wood, as well as metals and glass. In his own words, his art “involves the recycling of images and materials, moving from one time span to another.”