Artist Gu Xiong created the elaborately patterned print Cafeteria #1 as a meditation on wastefulness. The imagery depicts trays filled with discarded items that Xiong collected while working as a cafeteria busboy. The artist states, "we can produce as many things as we like, but we cannot recreate nature."

This artwork was acquired for the State Art Collection in partnership with Spokane School District.

Based in Vancouver, Canada, multi-media artist Gu Xiong creates artworks that explore questions of cultural identity. Xiong is a professor of art at the University of British Columbia in Vancouver. His artworks are in the collections of the National Gallery of Canada, the China National Museum of Fine Arts, and the Vancouver Art Gallery, among others.

Xiong was born in Chongqing, Sichuan, China in 1953. At age 18, during the Chinese cultural revolution, he was sent to live in the countryside. Xiong received a Bachelor of Fine Arts degree and a Master of Fine Arts degree (1985) from the Sichuan Fine Arts Institute in China. In 1986, he attended an artist residency at the Banff Centre for the Arts in Alberta, Canada, becoming the first artist from the People's Republic of China to do so. After returning to China, he was a part of the 1989 "China Avant-Garde" exhibition that was shut down by the Chinese police a few hours after it opened, four months before the Tiananmen Square protests of 1989. Xiong immigrated from China to Vancouver, British Columbia, Canada in 1989. 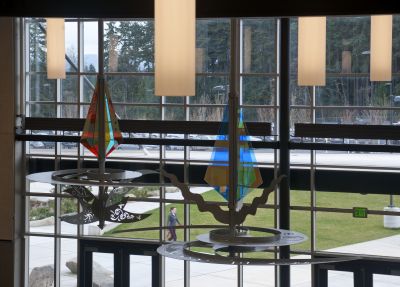