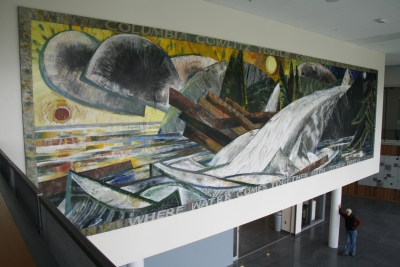 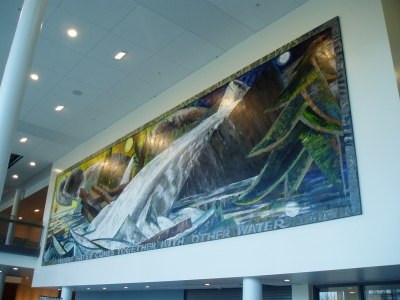 Where Water Comes Together With Other Water, 2008

Artist Lucinda Parker created the painting Where Water Comes Together With Other Water for the Rose Center for the Arts at Lower Columbia College, in Longview, Southwestern Washington. It is an abstracted landscape about the local geography and history, where the roaring Columbia River rushes into the Pacific Ocean.

Parker researched the complex watershed that involves five rivers flowing out of the mountains and emptying into the Columbia River. She visited the Cowlitz County Historical Museum, studied maps, and read books about the area and its logging history. She made more than twenty sketches to imagine different compositions for the 10x40 foot space. Her favorite sketches used a massive curved diagonal taking up most of the picture.

The final painting is a slightly abstracted and geometric landscape of a “splash dam” that was used before roads and rail lines to get logs out of the mountains. A splash dam worked like this: A dam of logs was built in a steep valley with a stream. The dam created a lake into which trees were cut all season. The dam was suddenly opened so that the whole mass of logs and water rushed out and plunged down through the valley to meet the Columbia River. Parker’s painting shows the end result of the splash dam, with the force of the giant logs meeting their destination. Both the landscape and its history are familiar to many people in the Pacific Northwest.

The painting’s title Where Water Comes Together With Other Water comes from the poem by Raymond Carver with the same name: Can anything be more wonderful than a spring? / But the big streams have my heart too. / And the places streams flow into rivers. / The open mouths of rivers where they join the sea. / The places where water comes together / with other water. Those places stand out / in my mind like holy places.

This artwork was acquired for the State Art Collection in partnership with Lower Columbia College.

Portland, Oregon-based painter Lucinda Parker creates landscapes and other compositions in an expressive, cubist style. She uses strong, visible brush strokes and bold colors. Her art expands on her personal interests in the natural world, literature, and music.

Born in Boston, Parker moved to Portland, Oregon in 1969. She received a Bachelor of Arts degree from Reed College in Portland, Oregon, and a Master of Fine Arts from the Pratt Institute in Brooklyn, New York. She returned to the west coast in the 1970s and became an associate professor at the Pacific Northwest College of Art in Portland, Oregon, for over thirty years.