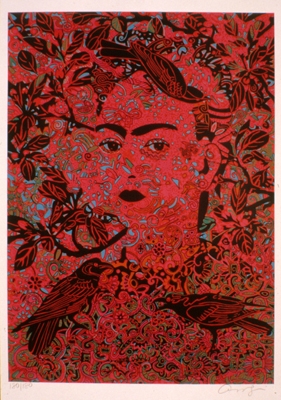 Frida's Messengers is part of artist Alfredo Arreguin's series of colorful and intricately patterned artworks that depict celebrated Mexican painter Frida Kahlo. He describes Frida as a figure of "wisdom, defiance, and creativity." She is framed by ravens, which are messengers between the living world and spirits of the dead in Mexican mythology. When you look closely, the artwork's surface is also covered in detailed patterns.

This artwork was acquired for the State Art Collection in partnership with Tahoma School District.

Seattle-based artist Alfredo Arreguin creates elaborate and colorful paintings that feature plants and animals. They are often covered with extremely detailed layers of patterns that can be seen best up close – Arreguin describes these layers as “lace-like screens.” He notes, "The magic of the jungle has had a strong influence on my work."

Arreguin was born in Morelia, Michoacán state, Mexico. He emigrated to the United States at age twenty-two to attend the University of Washington (1967 Bachelor of Arts and 1969 Master of Fine Arts degrees) and developed as an artist in Seattle, where he has lived since 1956. He was drafted into the U.S. Army and spent thirteen months in Korea. During that time, he visited Japan twice for one week of R/R (Rest and Recuperation). He notes that his time in Korea and Japan "opened my eyes to the visual richness of their culture; some elements of their art and designs would influence my work many years later." He has been honored with many awards and honors over four decades, including from the University of Washington, a Washington State Governor's Arts and Heritage Award in 1986, and several from Mexico, including the Ohtli Award, the highest recognition given by the Mexican government for contributions to the Mexican community abroad. His art is in collections and museums around the world, including the National Portrait Gallery and the American Art Museum (both in Washington D.C.), Seattle Art Museum, Tacoma Art Museum, and in Mexico and Spain. In 2018, the Bainbridge Island Museum of Art hosted a retrospective exhibition of his art, “Alfredo Arreguin: Life Patterns”.