Yelm High School’s Principal John Johnson shared, “I cannot express enough how much this project has meant to me as it is re-installed in a place of honor for our students and community; where it should have been these past many years.”
In addition to the student who illuminated the artwork’s poor condition and Mr. Johnson, who reached out to ArtsWA, there were many who assisted with this significant conservation project:

• Art handling company Artech developed a cradle system to remove the artwork while limiting stress to its aged and delicate wood grain. They also re-installed the artwork in its new home.
• Conservator J. Claire Dean developed the plan, performed much of the treatment, and oversaw the restoration.
• Artist and student of Marvin Oliver, David Franklin restored the painted surface.
• Engineering firm Rbhu developed an installation method that would be structurally sound and limit modifications to the artwork.
• Brigette Ellis, Marvin Oliver’s widow and partner, guided ArtsWA in making decisions about the treatment approach to best honor the artist and artwork.

More about Marvin Oliver
Marvin Oliver (1946-2019) was a master carver, sculptor, and printmaker. He produced works in cedar, bronze, glass, steel, and paper. He is of Quinault and Isleta-Pueblo heritage and drew on these sources in his art. Oliver was an important culture bearer and influence on generations of Native American art and artists. He described his art as “formulated by merging the spirit of past traditions with those of the present…to create new horizons for the future.”
Oliver was a professor of American Indian Studies at the University of Washington for more than forty years, as well as an Adjunct Curator of Contemporary Native American Art at the Burke Museum of Natural History and Culture in Seattle. He is recognized by generations of Native and non-Native students as an influential teacher and mentor. He began a tradition of an annual “Raven’s Feast” dinner in the 1970s to celebrate the accomplishments of Native American and Alaska Native graduates. He also gifted one of his prints to each graduate. Raven’s Feast has grown into a cornerstone of the UW Native community.

ArtsWA will celebrate this artwork and its renewal with the Yelm High School community at a re-dedication of the restored artwork in Fall 2021.

Read more about the conservation of Marvin Oliver’s Big Bird. 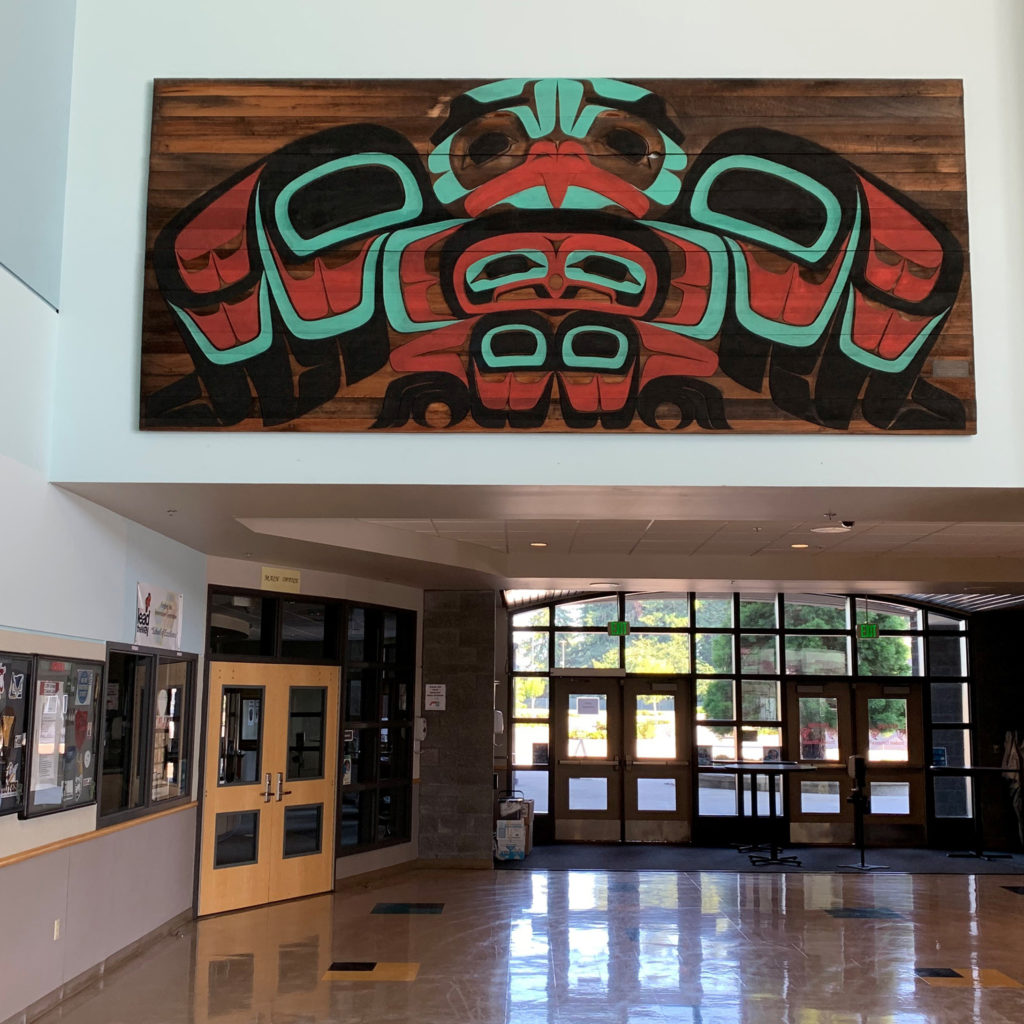 After major restoration, Marvin Oliver’s Big Bird was re-installed in June 2021 inside the Yelm High School Commons area. The artwork was previously located on the building’s exterior, where it was damaged by exposure to the elements. Photo by ArtsWA.

The Art in Public Places program (AIPP) is working to make the 2021-2025 Public Artist Roster our most inclusive and equitable ever. Applications for the Roster will be accepted starting May 10.

ArtsWA is looking for a new Deputy Director

ArtsWA is currently accepting applications for the position of Deputy Director. The Deputy Director serves as the agency’s chief budget and financial officer and will coordinate core agency services that…
Read more
September 17, 2021
Uncategorized

ArtsWA is seeking artists to submit conceptual designs for artworks to be installed in the forthcoming Washington State Library Archives building, which is scheduled to open in 2024. This call…
Read more
September 2, 2021
Agency News|Arts In Education

The Catalyst – Back to School Edition

ArtsWA is gearing up for the new school year with Arts in Education grant opportunities, resources for teaching artists, and lots of great online videos for early learners. Check out the the Back to School Edition of The Catalyst, ArtsWA’s eNewsletter. https://conta.cc/3yCHPEM

In this issue read about the new 2021 Public Artist Roster; an update on Creative Districts capital projects, and a reminder to register for Poetry Out Loud.